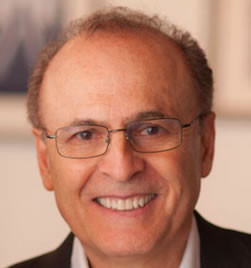 Riaz Khadem, CEO & President of Infotrac, is an expert in strategy deployment, performance management, leadership, and cultural transformation. He was born in Iran and spent most of his adult life in the US, UK, and Canada. He was educated at the Universities of Illinois, Harvard and Oxford, and has held academic positions at the Universities of Southampton in the UK, Northwestern in the US and Laval in Canada. Although he enjoyed the academic life, he realized that business was his true calling and made a major career shift into consulting.

Dr. Khadem's first project was with Bell Canada where he provided advice on the design of an integrated information system for Bell customers. His next project was to collaborate with a French company in building a large social services system. In 1980 he joined Peat Marwick Mitchell & Company in Chicago to deliver consulting advice to several of its large clients. While in this position he was invited by Fran Tarkenton to join his consulting group in Atlanta. He partnered with Fran and started Tarkenton Information Systems in 1981.

In 1984 Dr. Khadem started his own firm, Infotrac, Inc., and began building a consulting business based on the innovative concepts he had developed for information management and usage. He incorporated these concepts into a book entitled One Page Management published with a colleague, Bob Lorber as co-author. Ken Blanchard, the well-known author of The One Minute Manager was particularly intrigued with the book and offered to write a foreword for it.

One Page Management was published in the US by William Morrow in 1986 and was soon after published in Japan, England, Australia, Germany and nine other countries. The response to One Page Management was overwhelmingly positive, and resulted in hundreds of invitations to speak to managers and to provide advice to companies worldwide – in the manufacturing, transportation, insurance, banking, and retail sectors.

In 2002 Dr. Khadem responded to the need for a second book in the Latin market. The book was published under the title, Alineación Total (Total Alignment) in Latin America and drew Dr. Khadem’s consulting focus further into the Spanish market - particularly México.

In 2013 Total Alignment and One Page Management were completely revised in collaboration with Dr. Khadem’s spouse and business partner, Linda Khadem. The two books were released in Spanish and Portuguese in 2013.